The story of Big Bear’s gold rush begins at the corner of Stanfield Cutoff and Big Bear Boulevard. Back in 1859, this area was known as Starvation Flats. It was home to a small group of prospectors who were searching these hills for gold. One of those miners was a guy by the name of Bill Holcomb. As the name Starvation Flats implies, they weren’t having much luck.

Bill arrived in Big Bear during the dead of winter in February 1860. The valley was covered in snow. He set up camp in Starvation Flats, and joined up with the other miners who were already there.

That winter in 1860, was unusually cold and harsh. At Starvation Flats food was in short supply. So, Bill Holcomb and another miner by the name of Jim Ware, decided to go hunt for food. They started at out where Stanfield Cutoff is today, and headed north across the valley. They climbed up the mountain just west of Bertha Peak. From the top of the ridge he gazed upon a lush green valley that would eventually bear his name.

It must be remembered that this was a hunting trip. They were looking for a grizzly to kill, not gold. As they entered the newly discovered valley, the miners found and killed two bear. The next day they packed up their kill on burros and returned to Starvation Flats. With a fresh supply of meat at camp, Bill and another man by the name of Ben Choteau decided to return to the new valley for a couple of days and do a little prospecting.

Upon arriving back in the new valley, Bill shot and wounded a grizzly in the late afternoon. They began tracking the wounded animal, but it got dark before they could find it. So they camped out overnight and continued tracking it the next day. It was while tracking this bear, that they came upon a quartz lead that looked very promising. Upon closer examination they actually found gold in the rock. Excited, they immediately returned to Bear Valley to report their find. 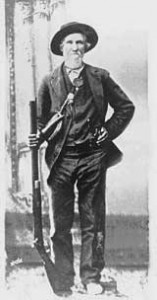 On the fifth of May they returned to what was now being called Holcomb’s Valley, and set up camp in the main gulch located between the upper and lower parts of the Valley. To their amazement they immediately started pulling out gold in significant amounts. From this point on, things were about to change in Big Bear forever.

News of Holcomb’s find spread quickly. By June over 300 men were at work in Holcomb’s Valley. By July, that number was up to 400 or 500, and by September, there were over 1, 000 men feverishly working gold claims.

Within two months of Holcomb’s discovery, a town called Belleville sprang into existence at the entrance into Holcomb Valley, near the upper part of Van Dusen canyon. It had a collection of stores, saloons, dance halls, and black smith shops. About that same time, two other towns also appeared in Holcomb Valley. There was Clapboard Town, located about a mile west of Belleville, near

Polique Canyon. About two miles northeast of here was Uniontown which later became known as Union Flat. Holcomb Valley even had a brewery.

When the ballots were rounded up after the election, the returns from one entire Belleville precinct were missing. As it turned out, he city San Bernardino was picked as the new county seat by only two votes. If it hadn’t been for those missing Belleville votes, who knows, today Holcomb Valley would probably be covered with high rise government offices, and fast food restaurants.
This is all that remained of Bellville by the early 1900’s.

Placer mining in Holcomb Valley was hard work. It was made even harder because of a lack of an adequate supply of water. Within a year, many miners were getting discouraged and leaving. The winter of 1861-62 was extremely brutal. Starting in December, it snowed almost every day. The Star reported on February 6, 1862 that “… Snow is sixteen feet deep at the mills in the mountains. …”.

After that winter even the most hard core miners decided to leave. On June 28, 1862, the Star reported that “… Holcomb Valley is all but depopulated, there not being more than thirty or forty people left. …”.

But that’s not the end of the story. In 1862, when the gold rush ended, there was still plenty of gold in both Holcomb and Big Bear Valley. It was just going to take a serious financial effort to get it out. To be continued in Big Bear Gold Rush Part 2.
© Rick Keppler