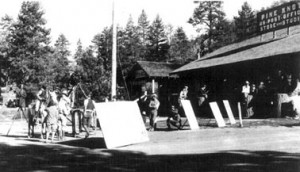 A Hollywood movie set at the old Pine Knot Lodge at Big Bear Lake in the 1920’s – Rick Keppler collection.

In March of 1911, a film company from Hollywood, called the Essanay Company, arrived at the Pine Crest Resort near Lake Arrowhead. They unloaded their equipment, and began filming a short one reel film entitled “Romance of the Bar O”. It is believed that this was the first movie ever made in the San Bernardino Mountains.

In July of 1911, the Bison Motion Picture Company arrived at the new Pine Knot lodge in Big bear and begin filming. They had traveled out here from back east, not Hollywood. They brought with them 28 actors and actresses, along with five wagon loads of equipment and props. They stayed in Big Bear for about two months, and it was reported that they could complete about one movie per day. That summer in 1911, Hollywood and Big Bear Lake began a love affair that has continued to this day.

At the same time that the film industry was getting started in Big Bear Lake, tourism was began to take off. Lodges were being built all over the valley. Real Estate values were soaring. Business was good, but only during the summer. During the winter months, the lodges and most resort businesses would close down and their owners would leave the hill. Except for a hand full of hard core locals, Big Bear sat empty. The ski resorts didn’t exist yet. During the winter months, there was absolutely nothing going on in Big Bear. 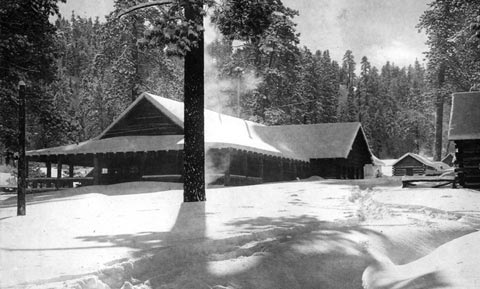 Until Pine Knot Lodge opened it’s doors to the movie studios, Big Bear was a ghost town during the winter. – Rick Keppler collection.

However, there was a local guy back then, by the name of Fred C. Skinner, who wanted to do something to try and change that. Fred was manager of the new Pine Knot Lodge, which was Big Bear’s largest resort. He had organized Pine Knot’s, first Chamber of Commerce., and in 1914, Fred informed Hollywood production companies that the Pine Knot Lodge would remain open during the winter if they wanted to film. He even brought in a generator, and Pine Knot Lodge had electrical power five years before electricity reached the valley. The movie industry enthusiastically supported Skinner’s efforts, and began filming right through the winters. Few people in Big Bear today realize just how important Fred’s work was back then. Until the ski resorts came along, it was the film industry, not the tourists, that kept the Big Bear community alive through the long winter months each year.

The Big Bear community and the movie industry pretty much grew up during the same time period. The film companies mixed easily with the local community, and Big Bear residents enjoyed working as extras on films whenever they were needed. Many early Big Bear pioneers including Dad Skinner, Bill Knickerbocker, Henry Shay (of Shay Ranch), and some of the Talmadges of the IS Ranch, all worked as extras in these early films. 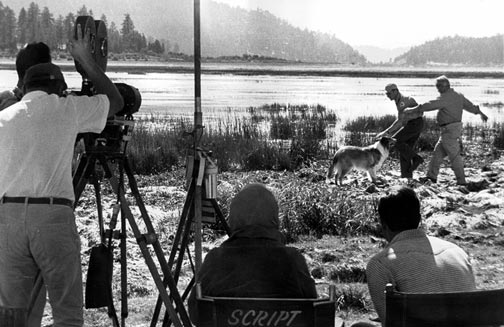 Lassie getting ready to perform on the shore of Big Bear Lake. – Rick Keppler collection.

The Big Bear Lake it self was used many times as a movie set. In this photo “Lassie” is performing in a scene on the north shore of the lake. 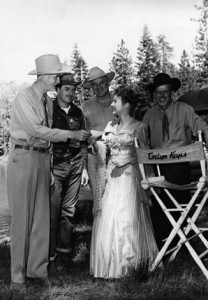 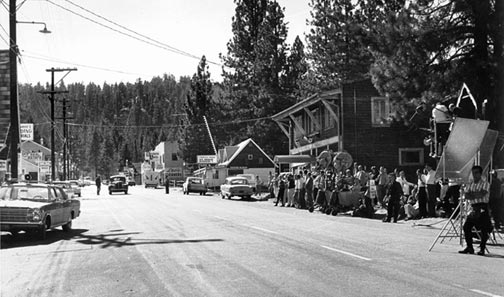 Big Bear Village was often used as a movie set. In the late 1970’s, Andy Griffith was all over Big Bear Valley in the late 1970’s filming his “Winter Kill” TV series. In the above photo a film crew is set up on Pine Knot Boulevard preparing to film Eferm Zymbalist Jr. in an episode of the popular 1960’s TV show the FBI.

At the north/east end of Baldwin Lake is Gold Mountain. It was here that Elias J. “Lucky” Baldwin built a 40 stamp mill back in 1873, and started a second gold rush. However it turns out that gold wasn’t the only thing that Baldwin’s stamp mill produced. Years later in the 1930’s, long after the gold rush was over, “Through The Wrong Door” and “Rocky Mountain Mystery” were both filmed at this historic site.

If you have lived at the east end of Big Bear Valley for any length of time, you have probably noticed an old log cabin sitting in the meadow off of Shay Road, out by Baldwin Lake. All of the homes in this area sit on what was grazing land for the Shay Ranch. Many locals believe this old log building was once the main ranch house of the old Shay ranch. The truth is, it isn’t even a real log cabin. It was built as a movie set back in 1940, for the film “Brigham Young” starring Dean Jagger. If you look at it closely, you can see that the logs are fake. The building is actually a historical relic left over by the film industry. 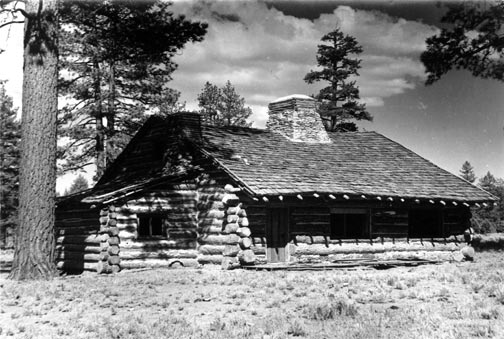 This old log cabin in Shay Meadows isn’t real. It is a movie set from the 1940’s. – Rick Keppler collection

It has been almost 100 years since Hollywood first discovered Big Bear. Since then, hundreds of movies, TV shows have been made in Big Bear Lake the San Bernardino mountains. The history of Hollywood’s relationship with Big Bear is still being written.