WE’RE GETTING A NEW BRIDGE

Ever since 1925, the majority of traffic entering Big Bear Valley has crossed over the old bridge currently atop the dam. It has served our valley well. Construction began in April 2009, on a new bridge that will replace the old existing bridge across the top of Big Bear’s multi arch dam as the main artery into Big Bear. This new bridge will completely bypass the old bridge and the dam. It is estimated that it will take Caltrans about two years to complete this project.

This May 23, 2009 image looks west from the north side of the lake. The new bridge will cross the valley behind and west of the existing dam, and connect at the top of the new road cut above the existing road. © Rick Keppler

This is what the new bridge construction project looked like on May 23, 2009. This image looks west from the south shore ridge near the old dam keepers house. © Rick Keppler 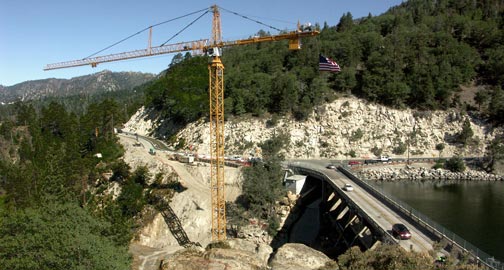 This June 20, 2009 image looks north from the south side of the lake. The new bridge will cross the valley just west of the existing dam. © Rick Keppler

As of October 2009, most of the work on the new bridge was taking place along the highway and in the valley on the west side of the dam. The following photos show the progress on the concrete foundations that will support the overpass.

Overall view of the work on the infrastructure for the new bridge in the valley on the west side dam. – October 10, 2009. © Rick Keppler 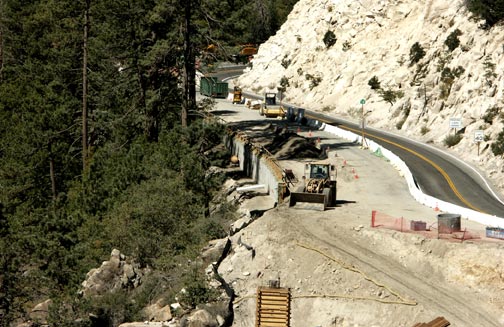 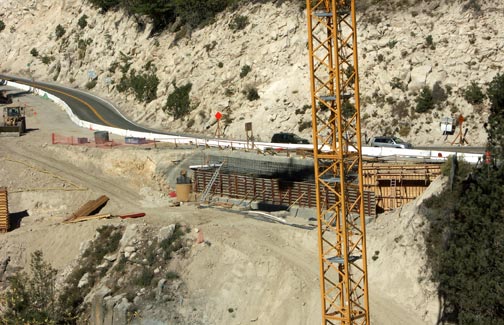 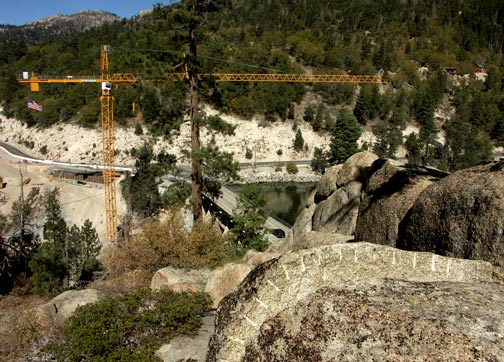 OLD TECHNOLOGY MEETS NEW. The white marks on the rock in the foreground are drill holes that split the large boulder. They were drilled by hand without the help of power tools by workers during the construction of the original rock dam that created Big Bear Lake in 1884. – October 10, 2009 © Rick Keppler